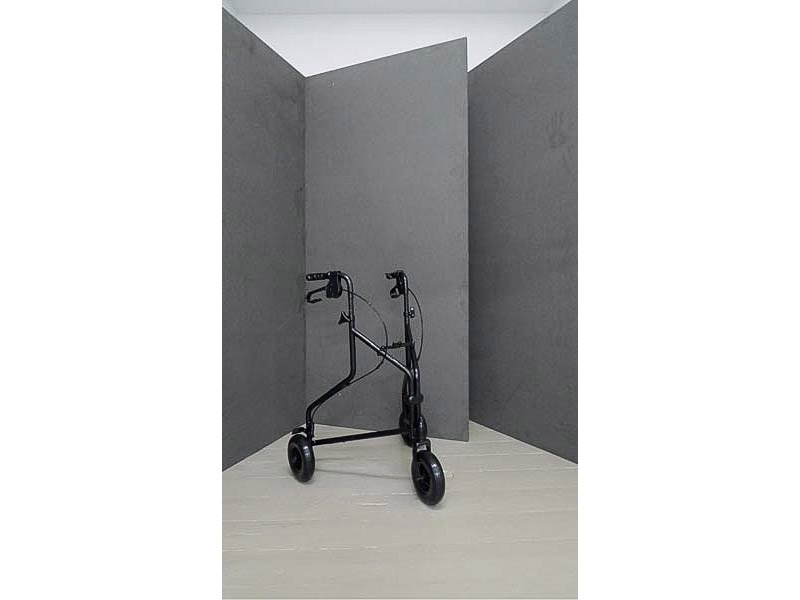 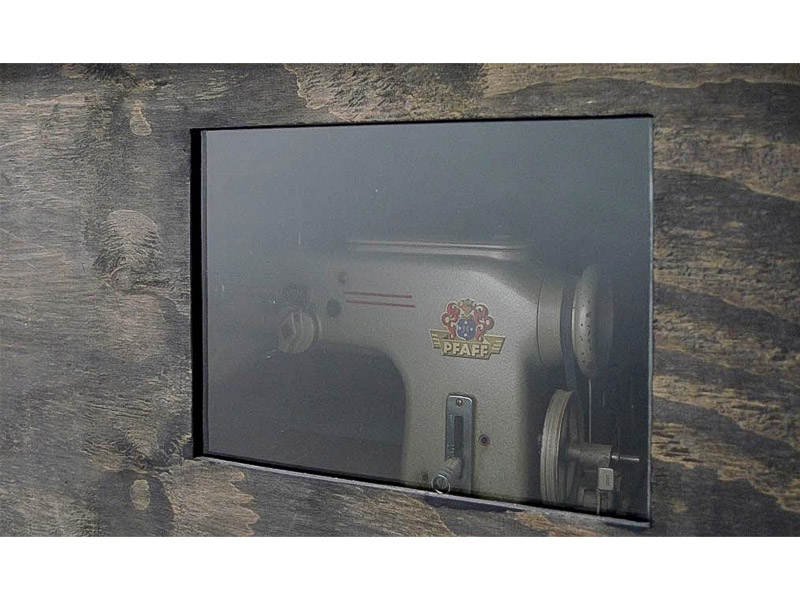 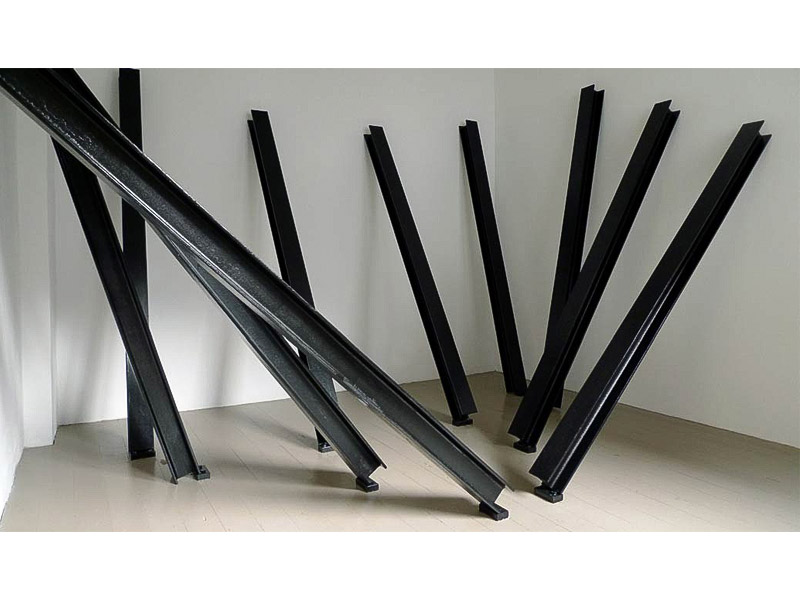 Born in the Ruhrgebiet city of Essen, the artist Andreas Golinski has studied in Basel and lives part time in Italy. Although his works contain an inherent social criticism, they remain private and even intimate. He lets collective fears, childhood traumas and desires take shape in his bulky, raw works. Steel, glass, black paint and plywood are the materials with which he ties together present and past: traces that reach into the shadow realm of his memories. Sometimes everyday utensils or disused machines play a main role. The post-industrial age is connected with moments of his private life. All the works are overlapped with the knowledge of an irretrievably lost world.
After exhibiting in Italy and Switzerland the exhibition at VAN HORN is the artist’s first solo-show in Germany.

The first room (“orgolio insolente silenzio”, 2010) of the exhibition is dominated by two big wooden crates, each has a small window to look through. What you can see coming out of the darkness are old sewing machines. One is a Pfaff, the other a Rimoldi. Today Andreas Golinskis girlfriends family lives in a defunct clothing factory in the village of Cantu in the north of Italy. It once employed not only tailors and seamstresses but was the employer for the entire region – until its economic decline. Production moved abroad, people lost their jobs as well as future prospects. Now the old sewing machines sit captured in dark boxes. No longer in service like the people who once worked there. Only the loud rattling and humming of the sewing machines, you can hear coming from a CD playing in the corner, are the reverberations of a time that has passed. On the walls hang two smaller crates, they present photographs of the former sewing factory. Black bars stand in place of the working people, thus making them invisible.

The second room is almost completely blocked by two massive wooden walls, so called corners (“Die Stütze”, 2010), narrowly allowing you to continue your way into the other rooms of the gallery. A vacant corner behind the walls is visible, but not accessable. In the front corner stands a black painted walking frame formerly belonging to the artists disabled mother (“Stütze”, 2010).

It was supposed to help her have a social life, but was left in a corner unused most of the time. The fragile lady felt ashamed to use the handicap walker. In turn her apartment became a prison – like the walls of the installation that block every way in and way out. The corner has been used as a classic place of shame since childhood and schooldays, here it becomes a synonym for involuntary retreat, refusal, punishment, surveillance. The rooms Andreas Golinski creates become a reflection of social realities, precarious living conditions and increasing alienation in a post modern world.
The two wall works in the next room consist of oil on cardboard. They get their hard structure and surface from the rough treatment with steel, “untitled (schwarz groß)” and “untitled (schwarz klein)”, both 2009.

In the last small room there are ten blackened steel beams that lean against the wall called “Untitled (kaputte Jungs / broken buddies)”. They echo a collective experience as well as the artists own: the reality of living and working conditions that industrial areas like the Ruhrgebiet stand for. The hopelessness is found in the heavy steel beams, that block the room. Leaning against the walls, bolted to the floor, the heavy double H-beams look aggressive and precarious at the same time. Their balance is not in danger, but it looks like it. “Where I come from, things are not always so easy.” Thus the artwork becomes a symbol of the workers physical exploitation, oppression and degradation in a cold, hard world. A lot of Golinskis works are bulky, they are obstacles, roadblocks, dead ends. Nevertheless there is a defiant pride to be felt, it shows in the critical opinion the artist has towards the marketing strategies of the art business.
Self-liberation and fulfilment are bourgeois pretentions about working, which for most people, who are missing social validation for what they do, must sound like mockery.

So, Golinski’s objects and installations are threads and projections of a former and still existing reality; a world like it is, a reflection of working class modernity.